It is suitable for both males and females. What is really confusing about Vitalex is that if one looks at its composition, it seems more like a multi-vitamin tablet than anything else. The major ingredients required for curing erectile dysfunction or premature ejaculation are completely missing. Also, many other ingredients which are quite common in sexual enhancement medicines like Yohimbe and Tibulus are also missing in Vitalex. Despite that, it was very popular because of its many useful properties which maintained the general sexual health and also had a positive effect on the functioning of liver and kidneys.

Here is brief look at its list of ingredients and how they are useful:

These pills were manufactured by a US company called Vitapro Inc. A couple of websites including the website of MMS Pro – the brand advertised by Vitalex list Indonesian company Moyex Ayus Pharmaceuticals as its manufacturer, though not much is known about this company. These pills were available at a very cheap price of less than $5 for 10 tablets.

However, some time back, the US FDA placed a ban on these pills because of the presence of an ingredient called acetildenafil, a fact which was not disclosed by the manufacturer.

This ingredient is known to cure erectile dysfunction but is not FDA approved since laboratory tests have not been done on it. Subsequently, the manufacturer stopped the production and marketing of these pills. Since then, Vitapro Inc. has also shut down and no longer exists and there is no information whether Moyex Ayus is still manufacturing them or not.

Customer reviews for Vitalex are not available anywhere over the internet. The reason for this may be because these pills have not been in supply since 2010 when FDA had slammed the manufacturer for hiding the fact that the pills contained an untested and possibly dangerous ingredient.

Above is a clipping from the press release from FDA dated April, 2010 which came after Vitalex was banned and Vitapro Inc. was convicted of manufacturing and marketing unsafe drugs.

A similar warning by the Canadian government was also issued on the government’s website healthycanadians.gc.ca.

It can, however, be determined that while the drug was available in the market, it had generally received good reviews from the customers. After all, a medicine with ingredients like iron, folic acid and calcium carbonate is sure to be good to keep the internal organs of the body healthy. Besides, it also contained a strong aphrodisiac. It has been observed that many a times sexual enhancement requires only a mental stimulant rather than a physical one and Vitalex provided it.

Also, the so-called dangerous ingredient called acetildenafil is very similar to sildenafil which is used in Viagra.
The only reason why it is categorized as dangerous is that it has not been tested and approved. It is very much possible that Vitalex had been as effective as Viagra in curing erectile dysfunction. However, the fact remains that acetildenafil is not tested and is therefore not recommended for use. 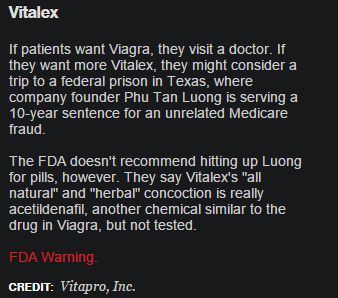 The short news podcast from cbsnews which has slammed Vitalex for violating the USA laws.

Vitalex is a medicine of the past and is not being manufactured now. Consequently, it is not available anywhere, whether at an online store or a retail store. If you come across a website claiming to sell Vitalex, be on your guard as in all probability it will be a scam.

As per the recommended dosage given by the manufacturer of Vitalex, one tablet a day was needed to be taken 20-30 minutes prior to any sexual activity. After 30 days of eating this pill regularly, the dosage was supposed to be reduced to one pill in 2-3 days. However, if the sexual performance did not show signs of improvement in a month then the daily pill was supposed to be continued.

As with most non-herbal sexual enhancement drugs, Vitalex too had some common side effects like dizziness, nausea, indigestion and hearing loss.

Apart from this, it could badly affect patients with existing cardiovascular problems. It was also known to cause seizures, extremely low blood pressure, gastrointestinal disorders, anxiety, reduction in blood clotting and sleep disorders.

Overall Score
Vitalex probably suffered its downfall because it tried to do too much with one pill. It had many benefits but it is simply impossible for one pill to be the ultimate cure for all sexual problems like sexual enhancement, erectile dysfunction and premature ejaculation. Also, hiding the presence of an untested and unregulated ingredient was the final blow which led many countries like USA and Canada to ban it. On the basis of its effectiveness, Vitalex deserves a rating of 2 star out of 5 star, though it doesn’t really make a difference now that it is no longer available and doesn’t seem likely to return to the market in the near future.
RXLEAKS Review - 2 out of 5 stars by Jocalyn Clark
Tags:Calcium Carbonate,Cordyceps sinensis,Epimedium,Erectile Dysfunction,Folic Acid,Iron,Premature Ejaculation,Priligy,USA,Viagra,Vitamin B12,Vitamin C,Vitapro Inc.