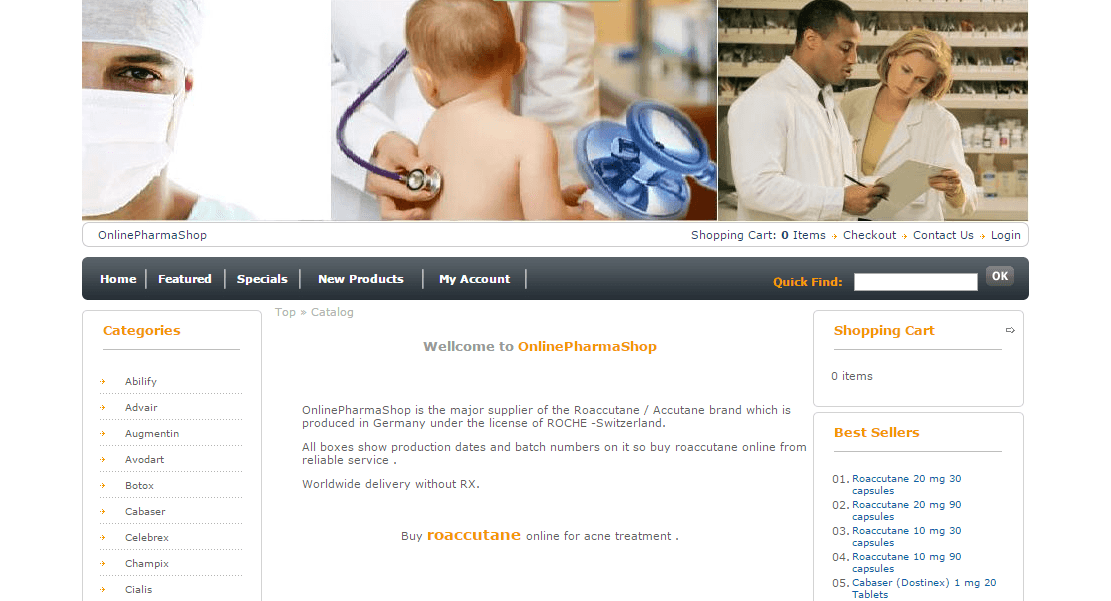 OnlinePharmaShop is an online pharmacy based in UK selling a broad range of medications to customers all over the world. It is the major supplier of the Roaccutane / Accutane brand which is used for acne treatment. The online pharmacy features this brand in its home page and seems to be selling this medication primarily although it also has stocks for other medications as well.

The online pharmacy offers worldwide delivery for the medications is carries without need of prescriptions. Customers can avail of various medications such as Augmentin, Cialis, Botox, Xenical, Viagra, Nexium and more from the site. There are also items on sale such as Modafinil tablets originally priced at £134.04 being sold at £67.05.

Prices quoted in the site are declared in pounds. Items bought are usually shipped within 2 days from order. Various payment methods are available such as all major credit cards, Western Union, e-check and bank wire transfer. Returns and refunds are accepted for the items sold subject to certain conditions.

The online pharmacy at first sight seems to be a legitimate site to purchase medications from. Although the medications that it carries are quite limited compared to other online pharmacies, it still offers enough range for the regular customer. However, the site is listed as risky in scam alert sites. To gauge if the site can be recommended for use, it is best to check out available customer reviews.

Before moving on to reviews, it should be noted that the site doesn’t have a very high trust rating among online review sites. In fact, it has been listed as a rogue pharmacy and reported as untrustworthy in scamadviser.com. Although this opinion is not conclusive on the overall experience that customers would encounter in the online pharmacy, it indicates that the online pharmacy may not be the best site to use for purchasing medications.

Customer reviews available about the site are very limited and it is only mentioned a few times in some forums. One such incident was from a user who asked others if the site can be trusted since he is looking at a particular drug that is sold relatively cheap compared to other sources. The common response of other users weren’t positive though and asked the user who posted the question to stay away from the site.

Apart from that discussion, it is difficult to come across other reviews or comments from customers about the site. It may be that the online pharmacy is not a popular site to purchase medication from. However, the lack of reviews makes it more difficult to assess the reliability of the site.

In 2014, the online pharmacy did get a few more reviews although there are too few to be considered substantial. The reviews available were both positive and negative.

On January 26, 2014, Brian P. expressed disbelief as to why the site has gotten poor reviews. He said that he has tested the site out and got his medications with super-fast and reputable service. This review is contrary to the one left by Mai M. on January 15, 2014. According to Mai, the online pharmacy is selling black market prescription drugs and is after user identity and credit card information. She mentioned several other negative things about the site and is convinced that it is a scam site.

No other reviews are available for the site. The reviews are too few to form a conclusion since they could be personal opinions of only a few users and do not represent the general public. Still, it is best to be extra cautious in such cases especially if negative reviews have been posted about the site already.

There are however some medications sold online that are offered at a discount. Customers can avail of the discounted medications to help save on costs.

Overall Score
At first glance, onlinepharmashop.com looks just like any other online pharmacy. However, it must be noted that the medications sold are rather limited. Further review of the site and its products would also reveal that it has a poor rating in scam alert sites. Even the smaller number of customer reviews available do not shed a positive light on the online pharmacy. Because of this, the online pharmacy gets a poor rating of 1 out of 5.
RXLEAKS Review - 1 out of 5 stars by Jocalyn Clark