Manforce (Sildenafil Citrate) is a widely popular drug used for the treatment of erectile dysfunction. It is a top product of the Indian drug company, Mankind Pharmaceuticals, one of the largest and most advanced pharmaceutical firms in the country. This drug is known to be a great alternative to the branded Viagra and it provides the same benefits. Its active ingredient, Sildenafil, makes Manforce an effective medication for impotence in men. It belongs to a group of drugs called phosphodiesterase 5 (PDE5) inhibitors which are prescribed to patients who cannot achieve erection long enough to consummate a sexual act. Sildenafil works by keeping the circulation of blood in men’s reproductive system efficiently functioning. This way, the penis becomes firmer and erects longer after sexual stimulation because the blood flow in the organ is boosted by the drug.

Erectile Dysfunction is known to affect many adult and elderly men, especially those suffering from other disorders such as diabetes and hypertension. Lifestyle changes have made this situation worse and more men are turning to quick and inexpensive solutions. That is why the demand for Manforce (Sildenafil Citrate) has consistently increased, as reported by its manufacturer. The use of this drug has been guaranteed to be safe by health authorities but users are cautioned to strictly follow the directions given by the doctor and indicated on the drug packaging. Many small online pharmacies which are not guaranteed to be trustworthy offer Manforce that can be bought at cheaper prices, without prescription. Consumers are warned against turning to these sites. To be able to purchase Manforce, you need to present a prescription from a medical professional. Doing otherwise can lead to serious complications.

Manforce (Sildenafil Citrate) has received generally positive reviews, as summarized in the screenshot shown above. Customers are generally satisfied with the effect but there are also those who said they did not get the expected benefits. These reviews are validated by the proceeding posts, where consumers have given true impressions about this drug.

The following comment are also very useful in evaluating this drug’s effectiveness, quality and safety.

In the post shown above, a 30-year old male shares his experience with this drug. He notes that it caused a number of side effects, saying: “After taking one tablet for some time, I feel nauseated and have to vomit. Also, I have burning sensation in the chest and abdomen.”

In an article shared by the drug manufacturer and posted on a business and health website, Manforce is said to have been voted as the number one drug for erectile dysfunction, based on consumer survey results. 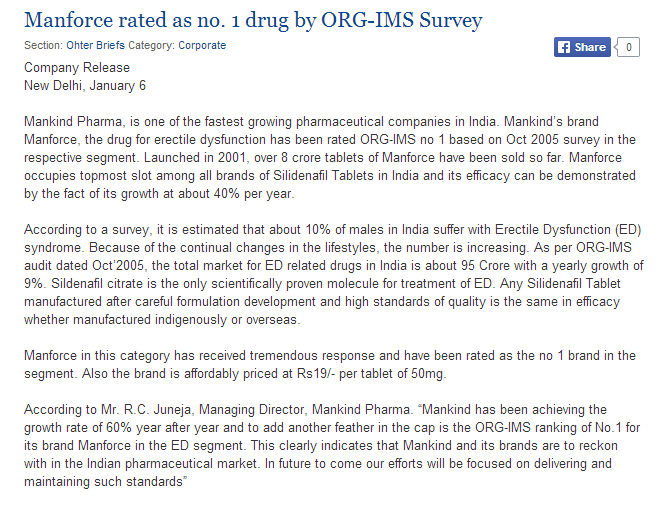 According to the article, Mankind’s brand Manforce, was rated ORG-IMS no 1 based on Oct 2005 survey in the respective segment. Over 8 crore tablets of Manforce have been sold so far. It has occupied the topmost slot among all brands of Sildenafil Tablets in India. This article provides an indisputable data about consumer feedback for this drug, and it is clear that consumers do prefer this product over other brands in the same category.

Manforce (Sildenafil Citrate) is available in the form of tablet in two strengths, 50mg and 100mg. The maximum recommended dose is 2x a day of 50 mg tablet taken as a maintenance therapy. Manforce injectable should be administered only by a medical professional.

Manforce (Sildenafil Citrate) is not an over-the-counter drug and therefore, you should present a prescription when purchasing this product.

How to Use Mankind Manforce 50 mg

Manforce tablet should be taken by mouth with a full glass of water at least 1 hour before your sexual intercourse. Do not take two doses at once. The injection should be administered only by your doctor.

Side effects for this drug are reported to be mild and tolerable. These include headache, nausea and vomiting, abdominal discomfort and flushing or redness in the face.

Overall Score
Manforce has been rated by many consumers to be a great medicine for impotence. Unlike other brands of Sildenafil, Manforce is both effective and safe. What’s interesting, it costs less than the leading brand, Viagra. The manufacturer of this product is one of the most trusted drug companies in India and the world, thus ensuring that it is of high quality. As such, we recommend this drug to males who want to enjoy normal sexual function. In a scale of 1 to 5, we are giving this product a score of 5.
RXLEAKS Review - 5 out of 5 stars by Luiz Antonio Martins
Tags:Erectile Dysfunction,India,Mankind Pharmaceuticals Pvt. Ltd.,Sildenafil Citrate,Viagra