7daypharmacy.net Review – Pharmacy with no Reviews and Not-So-Cheap Medications - RXLEAKS

7daypharmacy.net Review – Pharmacy with no Reviews and Not-So-Cheap Medications

7daypharmacy.net Review – Pharmacy with no Reviews and Not-So-Cheap Medications 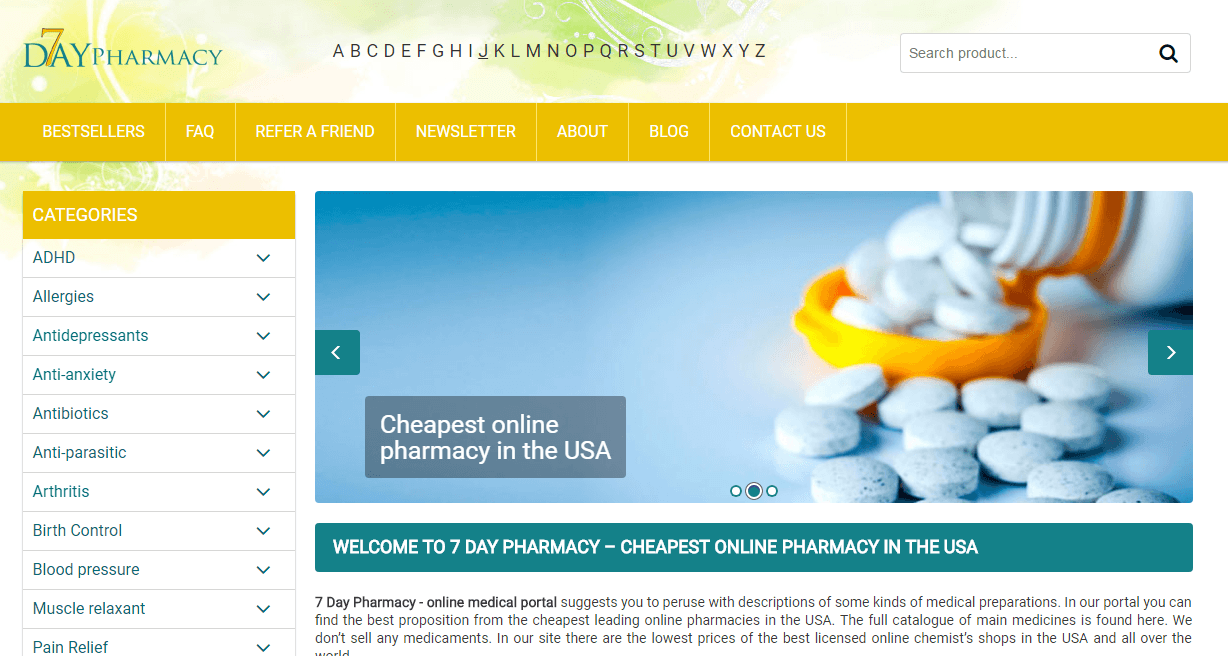 7daypharmacy.net doesn’t look appalling mainly because of its unprofessional look even though their motto clearly includes the word “professionalism”. However, one interesting thing I found was the company’s presence of various social media sites including Twitter. One very important thing to notice here is that 7daypharmacy.net is basically a medical catalog than an online drugstore. They only provide information about various drugs and suggest the customers where to buy authentic drugs.

The site of 7 Day Pharmacy has been operating since 2005. The online pharmacy store is located in the United States. They sell a wide range of medications including those for Skin care, Weight loss, blood pressure, eye diseases and so on. One thing that bugged me was that they were selling drugs for all diseases including some severe ones like cancer without any prescription. 7daypharmacy.net does not specify if they provide FDA approved drugs or not. Viagra is sold at a minimum price of 0.99 USD per pill which I found a bit expensive as compared to other average pharmacies’ prices.

I sought to look for some reviews for 7daypharmacy.net but found none. There are actually no reviews for the site – neither on any independent reviews site nor on the seller’s site itself. Mostly, in such situations where there is lack of any reviews, it gets quite difficult to get to know about the pharmacy’s reputation or to make a decision whether to deal with the site or not. Moreover, according to the scam analysis from scamadviser.com, 7daypharmacy.net does not seem to have a very good reputation.

In the absence of reviews, it’s not recommended for the customers to deal with the site since there may be a chance of unjust dealing from vendor’s side. In fact, the better option for the customers would be to order medications from an online pharmacy whose reputation is known and there exists evidence that the store deals fairly with its customers.

For the sake of finding out how 7 Day Pharmacy has been doing lately, I had to check out various scam analysis sites since there are no reviews available. Following is the summary of the reports obtained from Scam Adviser and Scammer.

From the report acquired from scamadviser.com, 7daypharmacy.net has a “low trust rating”.

These reports also suggest that the site might not be safe to be used by the customers and that it might be untrustworthy. It has also been listed as a rogue pharmacy. Scam Adviser, however, makes negative online feedback the basis of such bad analysis. Surprisingly, the site has had a lot of visitors.

Scamner.com gives almost the same site analysis as the previous one and suggests customers avoid browsing or dealing with the site.

The report also suggests that the users should not upload personal data on the site as it does not have a SSL certificate and user data can get compromised.

After a lot of digging into the site of 7 Day Pharmacy, I found out that there are hardly any coupon deals 7daypharmacy.net has offered for the customers. Some of the discount deals I found were for those users who re-order a specific medication.

For instance, if you re-order Viagra, you’ll be able to avail a discount of 7%.

Same deal goes with various other drugs. Some of their deals also include the delivery of some free pill in addition to the original order.

However, like many other pharmacies, 7daypharmacy.net also provides discounts on large orders where, on the bulk order of pills, customers can avail a large discount as the price per pill is comparatively lower in larger orders.

Overall Score
There are a lot of factors that make 7 Day Pharmacy not a considerable choice for me. The most important of these factors is that there are no reviews based on which I could decide whether to buy from 7daypharmacy.net or not. Another negative point would be the customer service which wasn’t responsive to my query even after 24 hours. I usually rate pharmacies on the mentioned factors and since the online pharmacy has failed in both of these, I would give 7 Day Pharmacy a rating of 2 out of 5 (5 being the best) and that is the very reason I would not buy from here.
RXLEAKS Review - 2 out of 5 stars by Luiz Antonio Martins